Based on Ykone’s Gampaygn platform, Gamned carried out an analysis of the performances of Swiss national footballers on Instagram. The tool has more than eleven million influencers on Facebook, Instagram, Youtube or Tiktok in its database and analyzes almost 50,000 posts every day. “In this way, Gamned can identify and analyze the performances of influencers in real time on social media,” says Pierre Berendes, Managing Director of Gamned. “Our study shows who are the most popular players on social media, those who are most engaged with their fan base, the countries they are from and the value of those players’ posts,” he adds.

Unsurprisingly, the team’s two stars, Shaqiri and Xhaka, have a combined 4.6 million fans. Together they are twice as popular as all the other 24 players on the team. The player with the smallest fan base is Eray Cömert. He has not yet reached the limit of 10,000 fans. 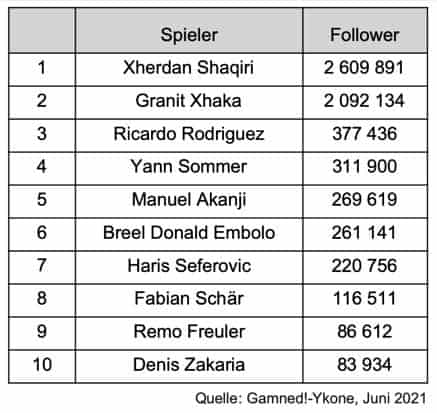 Who has the more engaged community?

Big influencers like Shaqiri and Xhaka have an engagement rate of 3.6 percent, which is very good considering the size of their community. For comparison: Ronaldo has a rate of 2 percent and Neymar a rate of 1.35 percent. Players with a community of between 10,000 and 25,000 fans have the best engagement rates. Wolfsburg’s Rubén Vargas has the highest engagement rate with almost 20 percent, followed by Jonas Omlin and Christian Fassnacht. 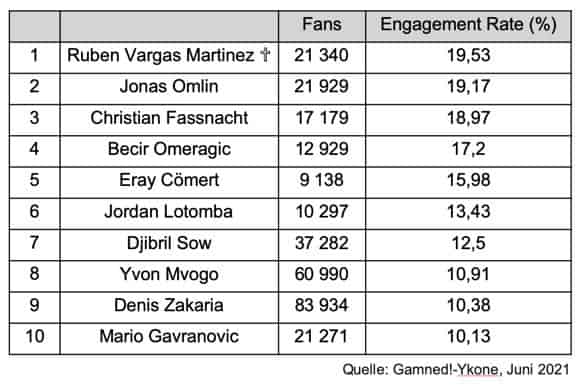 Where do the fans come from?

Most of the fan base is located outside of Switzerland. Only four players have more than half of their fans in Switzerland: Fassnacht, Lotomba, Omeragic and Cömert. They all play or until recently played in the Super League, the national championship.

Jordan Lotomba left the Young Boys for Nice in summer 2020. On the other hand, Ricardo Rodriguez, Xherdan Shaqiri and Granit Xhaka are at the bottom when it comes to the percentage of Swiss in their fan base. That’s because these players play for top European clubs – Inter, AC Milan, Bayern, Arsenal, Liverpool, etc. 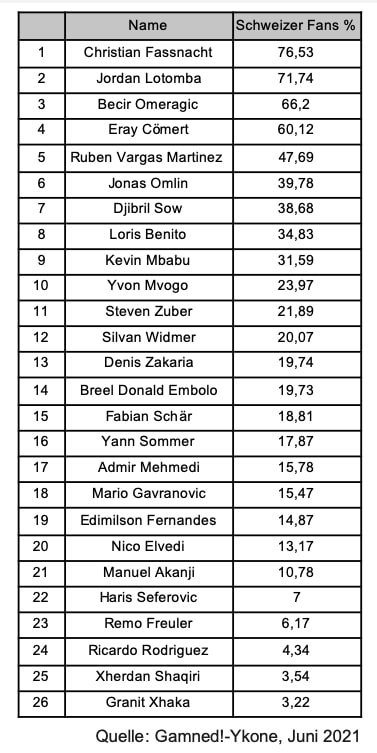 Why are most of the players’ fans outside of Switzerland? This is because it is mainly club fans who follow the Nati players on Instagram. The two Bundesliga players Nico Elvedi and Denis Zakaria, for example, have more than 40 percent of their fans in Germany. 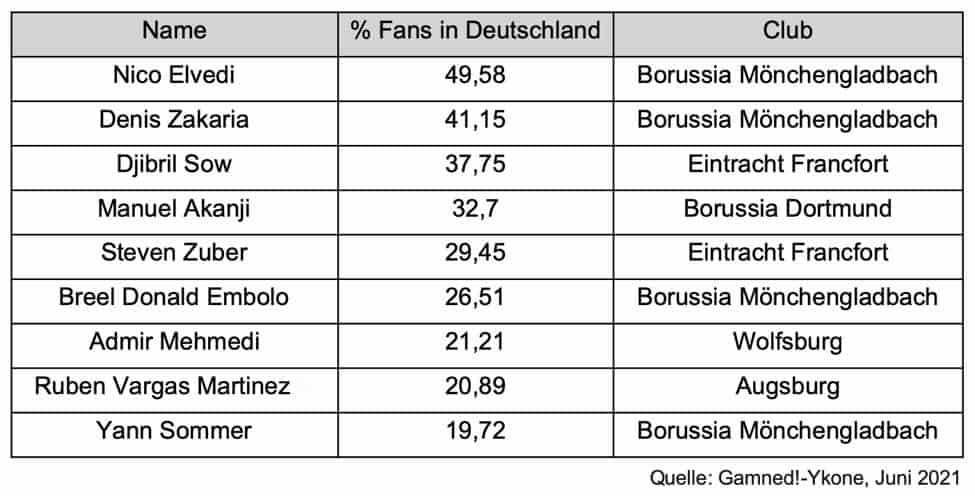 See also  Berbatov with a letter to the President, the Minister of Justice and the Registry Agency because of Borislav Mihailov and the Bulgarian Football Union

Benfica striker Haris Seferovic, on the other hand, has more than 50 percent Portuguese followers. Mario Gavranovic, who plays for Dinamo Zagreb and also has Croatian citizenship, also has a following of over 46 percent in Croatia.

Are the Swiss players worth gold?

If every player on the team posts on Instagram, 1.4 million people should be reached and 350,000 interactions should be made. This corresponds to a media equivalent of more than CHF 300,000. At the individual level, a posting by Xhaka on Instagram is valued at 90,000 francs, compared to 100,000 francs for Shaqiri and 17,000 francs for Seferovic or Sommer.

Players like Edimilson Fernandes, Silvan Widmer, Eray Cömert or Jordan Lotomba would only earn a little over CHF 1,000 per contribution. That is still a long way from the millions for a post from Ronaldo or Neymar. 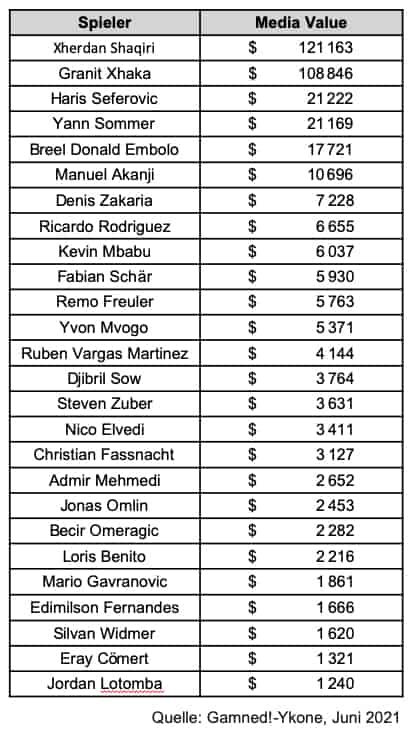 They capture in videos shootings in Magdalena de...

Still on the ball at 97: Leonid Stanislavskyi...

Shikabala sends a message to Ramadan Sobhi after...

Napoli want Lacazette and are already negotiating with...

Lyuboslav Penev is no longer the coach of...