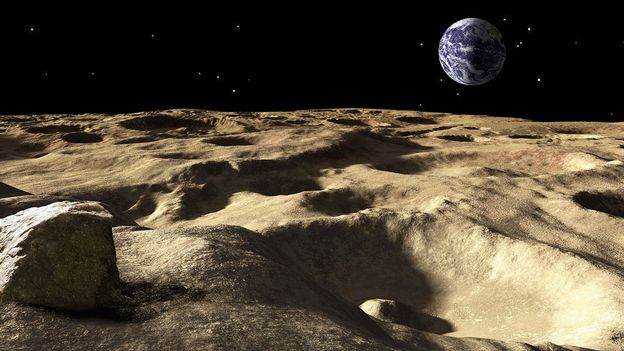 A doctoral student at the University of Bern, Adomas Valantinas carried out this work during a stay at Brown University (USA), notably using data from NASA’s Lunar Reconnaissance Orbiter (LRO) probe.

The researcher observed on the visible face of the Moon mountain ridges with portions of basalt rocks freshly exposed. These rocky areas release more heat during the lunar night than the surrounding dusty surface, so that they can be detected by the Diviner instrument on board the LRO probe which measures the temperature on the surface of the Moon.

Diviner’s nocturnal readings revealed more than 500 spots of this type. With Peter Schultz of Brown University, Adomas Valantinas mapped these mountain ridges and found an almost perfect correlation with old cracks in the lunar crust discovered by NASA’s GRAIL mission in 2014.

These cracks became channels, through which magma flowed which formed deep grooves. In their study published in the journal Geology, the researchers suggest that the mountain ridges overlooking these gorges are always in an upward movement, which explains the recently exposed rocks.

According to them, it is possible that the phenomenon is still in progress, because on the Moon, everything is quickly covered with a dust called regolith resulting from the impacts of meteorites. According to Professor Schultz, quoted Tuesday in a press release from the University of Bern, these movements would be the consequence of a gigantic impact on the far side of the Moon 4.3 billion years ago.

“When we return to the Moon, these places with bare boulders will be of great importance, samples will give us a lot of new information,” concludes Adomas Valantinas.

This smart glove is able to translate sign language into English

In Rouen, Sarah Vauzelle is the new assistant for sport and...

Jamie Lynn Spears tears up as she recounts the details of...

Fitch Predicts Recession “of Unprecedented Depth” Due to Coronavirus Pandemic