San Felipe del Progreso, Edomex, September 9, 2021.- Agents of the Criminal Investigation Agency (AIC) of the Attorney General’s Office (FGJEM), in coordination with state police, and elements of the National Guard and the Mexican Army They searched a property in this municipality, where seven long weapons, chargers, more than 700 useful cartridges of various calibers and drugs were found, and seven people were arrested.

This search procedure was requested from a judge as part of an investigation initiated after elements of the state police initially detained Luis Enrique “N”, Celso “N” and Wendy “N” in this region of the state. , and later FGJEM agents secured 21-year-old Yuri Delsy “N” and 34-year-old Pedro “N”, who had drug packages and two communication radios in their possession.

As a result of the capture of these people, various procedures were carried out that made it possible to establish that they were apparently members of a cell of La Familia Michoacana and a home used to commit criminal activities was located.

With this information, the Public Ministry asked a judge to issue a search warrant for a house located on La Paz street, in the town of El Calvario Buenavista, in the municipality of San Felipe del Progreso. This injunction was granted, so that personnel from the AIC, the Atlacomulco Regional Prosecutor’s Office, the State Police and Federal Forces, moved to the place, where the following was found:

At the end of the search, this property was secured and seals were placed on its access doors.

By continuing with these actions, elements of the FGJEM, together with personnel from the National Guard and the SS, carried out an operation in this area and assured Martín Israel “N”, 44, alias “El Gato” and Nallely Isaura “N” 30 years old, who apparently belong to the same criminal cell. 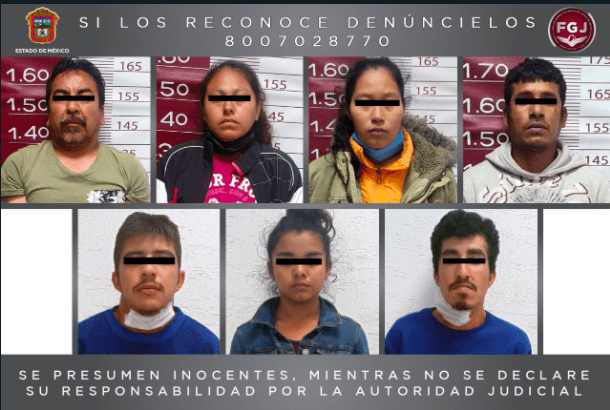 These people were found and assured the following:

In the same way, these two people were presented before the Agent of the Public Ministry, who initiated the respective investigation folder for these events.

It is worth mentioning that Luis Enrique “N”, Celso “N”, Wendy “N”, Yuri Delsy “N”, Pedro “N”, Martín Israel “N” and Nallely Isaura “N”, were admitted to the Penitentiary and Reintegration Center Social de El Oro, in compliance with an arrest warrant issued against him for the crime of extortion.

The seven probable participants were left at the disposal of a judge, who will determine their legal situation, however, they must be considered innocent until a conviction is handed down against them.

The FGJEM continues with the investigations in order to establish the possible participation of these people in other criminal acts that occurred in this region of the state.

The request could not be satisfied

Kemba Walker back in lineup for Knicks after missing 9 games

The Greek Matisse flew away like his emblematic birds

The giant Microsoft buys Activision Blizzard, the developer of the famous World of Warcraft and Call of Duty, for $ 68.7 billion. Activision stock explosion

In the middle of Würzburg: blogger surrounded and harassed by “lateral thinkers”.

The request could not be satisfied