Covid-19: New avenues to explain why children are less at risk of severe forms | Newsroom

Sorry, this entry is only available in French.

This colorized electron microscope image shows SARS-CoV-2 isolated from a patient in the United States. Viral particles emerge from the surface of cells grown in the laboratory. © NIAID-RML Creative Commons.

Why are children less prone to critical forms of Covid-19 than adults? This question has been studied by many scientists since the start of the pandemic. Several interesting leads are emerging, suggesting in particular differences in the immune responses that are put in place following infection with SARS-CoV-2. In a new study, researchers from Inserm, the University of Angers and the University Hospital of Angers, members or partners of the Nantes-Angers Cancer Research Center and Immunology (CRCINA) have shown that the response interferon, which is part of the innate immune response, is not the same depending on the age of the patients. The results were published in the revue Frontiers in Immunology in November 2021.

Symptoms of Covid-19 vary greatly from person to person. While some individuals are asymptomatic after being infected with SARS-CoV-2, others develop severe forms of the disease, which can lead to death. From the start of the pandemic, age was identified as a major risk factor for a severe form of Covid-19. Unlike adults, and especially the elderly who are very vulnerable to infection, children usually do not have clinical signs of the disease (or only mild symptoms).

Many research teams are trying to understand which parameters of the immune response could explain this difference in vulnerability to the virus between the elderly and the young.

In this collaborative work, researchers from Inserm and the University of Angers within the Nantes-Angers Cancer and Immunology Research Center as well as the Virology and Immunology laboratories of the Angers University Hospital, hypothesized that children would be protected due to a stronger local innate immune response in the nasopharyngeal mucosa. So far, innate immunity to Covid-19 has been less studied than the adaptive immune response[1].

A few reminders about the immune response

Innate immunity is the immediate response that occurs locally, at the entry point of a pathogenic microorganism, in any individual, even in the absence of previous contact with this microorganism. It is the first barrier of defense against pathogens. In case of viral infection, it mainly involves cells « Natural Killer » that kill cells infected with a virus. It also induces the production of interferons by infected cells, and these interferons protect neighboring cells from infection.

Adaptive immunity is a response which will take 5 to 7 days before being protective, when the pathogen is encountered for the first time (primary infection) but will be effective more quickly when the pathogen has already been encountered (this is referred to as a memory response). In the event of viral infection, it involves two types of protective immune cells: B lymphocytes producing antibodies which bind to the virus and “neutralize” it, that is to say preventing its entry into the cells and promoting its elimination, and cytotoxic CD8 + T lymphocytes which kill infected cells. B and T cells recognize protein structures (in the virus) called antigens.

After a viral infection or vaccination, the level of antibodies and lymphocytes recognizing the virus decreases over time. Nevertheless, B and T lymphocytes called “memories” remain and patrol. They will act faster and more effectively on subsequent contact with the same virus.

In their work, the scientists analyzed the nasopharyngeal swabs from 226 people who came to perform a PCR test in a “drive” screening center at the Angers University Hospital from March 2020 to March 2021. Among these individuals, 147 were infected with SARS- CoV-2. “The originality of our work is not to have preselected the participants, so as not to bias the results, but also to be interested in innate immunity, and more precisely in the interferon response”, underlines Yves Delneste, Inserm researcher who took part in this study.

When cells are infected with any virus, they quickly produce type I (IFN-α / β) and type III (IFN-1) interferons (IFNs), which are powerful natural antiviral molecules. They are called interferons because they “interfere” with the replication of the virus and protect neighboring cells from infection.

These interferons all have antiviral activity, but their modes of action are not redundant. Indeed, each induces an antiviral response of different intensity and duration and acts in a different but complementary way on the immune response.[2].

An insufficient or unsuitable interferon response will not make it possible to contain the replication of the virus or may promote a pathological immune response (for example a runaway of the immune system as seen in severe forms of Covid-19).

Analysis of the samples studied by the research team revealed that, in subjects infected with SARS-CoV-2, the expression profiles of type I (IFN- α / β) and type III (IFN -l) differ with age. Thus, children under the age of 15 have an increased expression of type III interferons, molecules that are not very inflammatory and have a local action, which control the virus locally at its point of entry, in the nasopharyngeal mucosa. Conversely, adults, and in particular the elderly, preferentially express type I interferons, which are inflammatory and have a more systemic action (throughout the body). 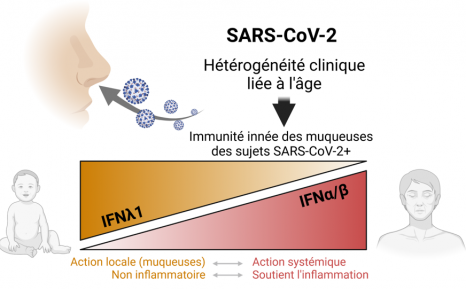 “These results help explain why children are less prone to critical forms of Covid-19 than adults. Type III interferons, which work primarily by locally protecting the epithelium, could control the infection at the point of entry, without inducing excessive generalized inflammation, and thus prevent a slide into the inflammatory storm with massive cell destruction that we see in severe forms “, underline Pascale Jeannin (university professor and hospital practitioner) and Dominique Couez (university professor) in Angers, who led this work.

Based on these results, scientists will now conduct a prospective study to assess whether, in children with clinical signs of the disease, the characteristics of the interferon response associated with severe forms in adults are present and whether they can help predict the course of the infection.

COVID-19: who are the vaccinated in intensive care?

Binance is not easy to enter the Thai market, Bitkub is still the leader in the country.

President of Barcelona visited the funeral of a historic Madrid

COVID-19: who are the vaccinated in intensive care?