Home News After the defeat of the left in the Madrid elections, Pablo Iglesias announced that he was retiring from Spanish politics
News

After the defeat of the left in the Madrid elections, Pablo Iglesias announced that he was retiring from Spanish politics

The leftist leader Pablo Iglesias announced on Tuesday, after the defeat of the left in the regional elections in Madrid, that he will abandon Spanish politics forever: “I’m not going to be a stopper for our game.”

Iglesias, who had already left the executive of the socialist Pedro Sánchez in March to compete in Madrid and try to boost his party, affirmed: “The results, the electoral success of the Trumpist right that Ayuso represents and the ultra-right, is a tragedy for education, health and public services. In state terms, I predict that these results will exacerbate the problems ”.

“The results of the left are bad, the PSOE has lost many seats. The results of Más Madrid are to be congratulated for their results. Our result is not enough to be an alternative government to the right ”, he explained, to justify his resignation.

And he affirmed: “I leave all my positions, I leave politics in institutional terms. I will continue to be committed to my country, but I am not going to be a stopper for our party ”. “If they make you a scapegoat, and your role is limited, and you mobilize the worst of those who hate democracy, you have to make decisions”He added, referring to himself.

In addition, he briefly referred to the renewal of his party, Unidos Podemos, and spoke of the importance of new leaderships and women in the construction of the new politics. As he did in March, Iglesias pointed out how possible successor of his to Yolanda Díaz, Minister of Labor and current third vice president of the government of Spain. The replacement must be raised at a party congress.

“Yolanda Díaz will determine the future of the left in Spain in the coming years. I am proud but when you stop being useful you have to know how to withdraw ”, added. 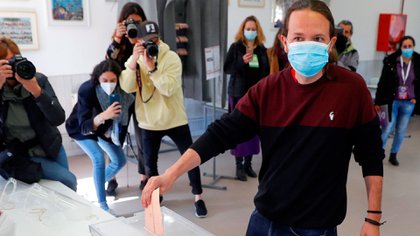 With this unexpected announcement, Iglesias leaves the party he co-founded in 2014 at 42, then taking the witness of the anti-austerity movement of the Indignados, which emerged in May 2011 in Madrid.

Till the date, Iglesias has been the only secretary general that Podemos has known, from whose dome many figures have fallen over the years members of the initial nucleus, often due to disagreements with his leadership.

Indeed, one of the founders of More Madrid, in 2019, was Íñigo Errejón, once right hand of Iglesias.

The conservative The Popular Party doubled the results of the 2019 elections, when it obtained 30 seats and exceeded the sum of the three left-wing parties, which have 58 deputies: 24 from the Socialists (PSOE), 24 from Más Madrid and 10 from Unidos Podemos, in very polarized elections between the bloc on the left and the right.

With information from AFP, EFE

Balenciaga’s work and Alaïa’s, together in an exhibition in Getaria

After the suspicions of corruption of jurors in...

Europapark could open by the end of the...

Chelsea vs. Barcelona – Match Report – May...

Eintracht’s search for a coach: Glasner, Seoane or...

“There is a lot of abatement”, testifies Pascal...