Apple’s new watch has encountered some production issues… which justify certain decisions made by Apple.

Unlike the other products presented yesterday by Apple, the Apple Watch Series 7 does not yet have an official launch date. The watch will be marketed during the fall of 2021, without further details.

This lack of details would be linked to production concerns encountered by Apple in recent months, production concerns which would have led the computer giant to settle for only a few improvements this year, without touching a large part of the technical sheet of the watch. The Series 7 will, for example, have the same processor as its ancestor.

No fast charging for older models

This is one of the big novelties of the Series 7. The Apple Watch switches to a USB-C charger, which allows the passage to accelerate the charge by 33%. Be careful, however, if two of you have an Apple Watch in your couple, this charger will not allow you to take advantage of this fast charge with an old model of Apple Watch. There is therefore no need to rush into the store, hoping to “upgrade” your watch with a simple charger… According to Apple, the Series 7 charger will however be compatible with older Apple Watch models.

Its screen is technically no bigger 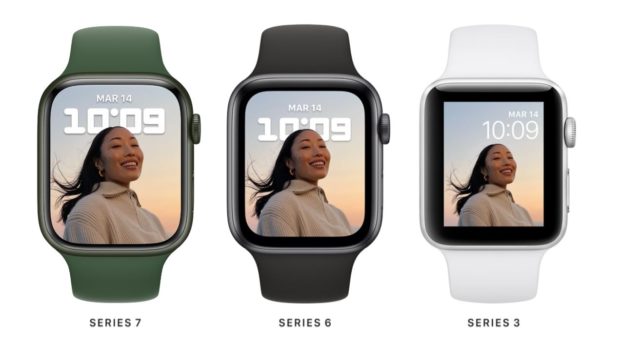 If Apple briefly mentioned a “larger” screen, the manufacturer did not take much time to explain the difference with the other models during its keynote. Nor specify that his new watch is not larger than his ancestors. The manufacturer actually reduced the size of the edges on the sides of the screen by 40% compared. The Series 7 screen is therefore 20% larger than that of the Series 6 and 50% larger than that of the Series 3. This naturally offers much better readability.

It is much more resistant

During its keynote, Apple also briefly mentioned “better resistance” without dwelling on the characteristics of its watch. It turns out that a lot of work has been done at this level to make the accessory much more resistant.

The glass layer on the screen is 50% thicker than on the Series 6, and up to twice as thick in the middle. To prevent this from impacting the thickness, the giant has revised the manufacturing process by integrating the touch sensor into the OLED panel. The shape of the screen has also been changed with flatter edges – which are also said to be more impact resistant. The Series 7 screen should therefore crack much less quickly during a fall.

3 reasons to renew your mortgage in Canada

The Longines Master Collection Moon charm on the...

Launch of Xiaomi CIVI, a new series of...

Apple revolutionizes the design of the iPhone 14,...

They discover strange abandoned Lamborghini; there are only...