Home News 3000 starters from 200 companies were there «kleinezeitung.at
News

3000 starters from 200 companies were there «kleinezeitung.at

On Thursday Graz was all about running again. The winning teams and the most beautiful pictures.

A 3G certificate was compulsory for all participants, but that didn’t detract from the good mood: around 3,000 runners went on Thursday (September 23rd) at the Raiffeisen Businesslauf at the start. The event took place for the 20th time this year – after a two-year break that had to be taken due to the corona pandemic.

Teams from around 200 companies were on the line. She performed 5,1 Kilometer through the city center of Graz – from the Karmeliterplatz and Freiheitsplatz it went through the Burgtor, the city park and the university district. The starting shot was given at 5.30 p.m. Mayor Siegfried Nagl and RLB Board Director Dr. Florian Stryeck.

With perfect running weather, the participants enjoyed the competition, and finally, at the big running party and the award ceremony, there was an opportunity not only to talk about the best times. Large teams were provided by AVL List GmbH with 220 starters, the city of Graz started with 285 runners, and Knapp AG with a team of 135. The DJs from Antenne Steiermark ensured a good atmosphere along the route. 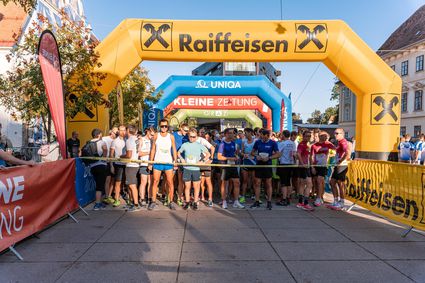 The individual ranking for men leads Christian Nindl at. He only needed 16:25 minutes. Triumphed among women Maria Hochegger (18:04 minutes) – she already won the Raiffeisen Business Run 2019.

>>> All results of the team and individual competitions

Completely lifted off: The richest in the world and their gigantic CO2 footprint

Globus: The “chance of the century” was real,...

The LPR representative in the JCCC detained by...

Rumen Radev: We will not force anyone to...

[Formation] Defeat in Colomiers for the U19

Mainfranken: The cheapest petrol stations in the region